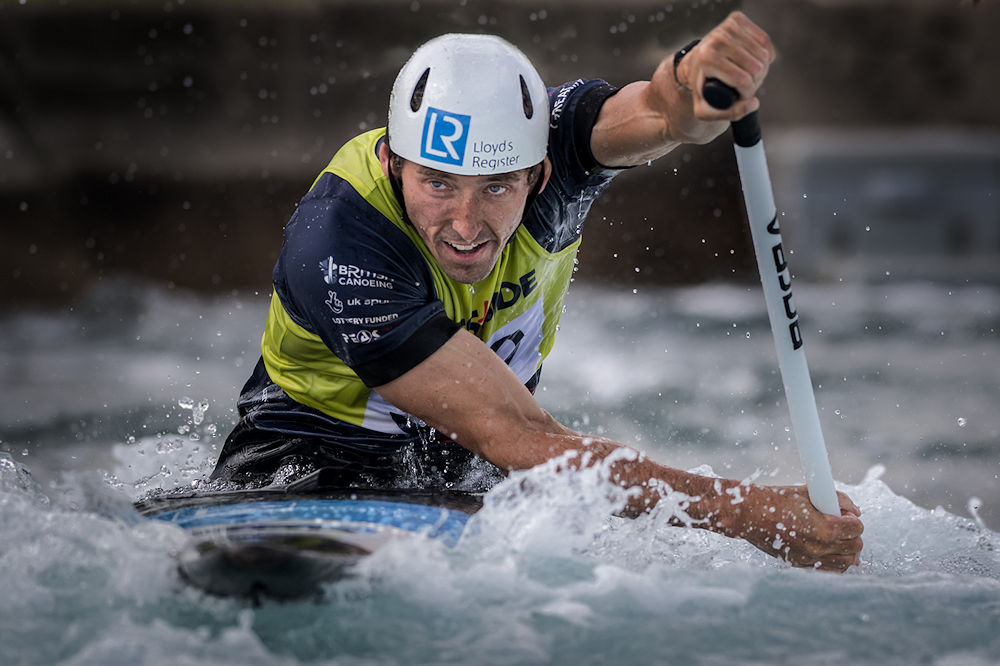 British Canoe Slalom legend David Florence has announced his retirement from competitive paddling. As one of the world’s top slalom canoeists, David leaves a unparallelled legacy in the sport, and having been a member of the British senior team for an incredible 21 years, he will hang up his paddles with an unprecedented medal record in Great Britain. With three Olympic silver medals and three world championships titles, David has also been European Champion and has won more than 25 World Cup medals, including seven gold.

David hails from a family of paddlers. He was born in Aberdeen, his dad, brother and uncle also representing Scotland on the competitive circuit. He began canoeing aged 14 on the Water of Leith before joining Forth Canoe Club, training on the Union Canal. David moved to Nottingham for University in part due to its proximity to the National Water Sports Centre, where his paddling career went from strength to strength. He made his senior British team debut in 2000, and won his first international medal in 2005, a bronze at the second ICF World Cup. Since then, he has stood on the podium more than 50 times, most recently two World Cup silver medals in the 2021 season.

In 2016 David became the first British canoe slalom athlete to attend three successive Olympic Games, and was the first athlete to win Olympic medals in more than one class, won silver in C1 in Beijing in 2008 and then C2 silver with Richard Hounslow at London 2012 and again in 2016.

Reflecting on a record-breaking career, David said: “I’ve been really fortunate to have had so many great experiences and get to do something I love for so long. I feel really privileged.

“There are so many highlights. To go into the Olympic Games in 2008 and win that first Olympic medal was really special and then to win the world championships in C1 and C2 on the same weekend (in 2013). But I’ve had so many fantastic experiences and races. I’ve had a great time and achieved results that I'm proud of.

“I've loved going to the Olympics and winning medals but what’s kept me motivated is the enjoyment of trying to improve and trying to be my best. I have genuinely enjoyed being out on a winter's day. If there's no one there and the weather is not quite right, it’s just me, practising upstream gates and feeling that I'm getting better at them. I've always had that in me, just that desire to be better, always looking for new ideas, ways to improve. I think that's definitely been a big part of why I've done it for so long and why I've really enjoyed it."

“To be successful in any sport you need a bit of luck, and I've had great support from brilliant coaches. I've had good training groups, an awesome bunch of people that I've enjoyed growing up within the sport, people that I looked up to and I think all those things have combined to a really great career. I've always had a lot of support from my parents. My dad started me and my brother out canoeing and my sister has always been super supportive too. They’ve travelled to so many international competitions to watch me race."

“My wife has been incredible and hugely supportive. It's been pretty full on, we’ve had three kids in the last seven years, so going away and training has been hard. My daughter was born just a few weeks before the Rio Olympics ,so Becky has been so supportive.”

David admits there have been so many people who have played a role in his career.

“Mark Delaney has also been one of the biggest influences on my careers. He coached me for such a long time and through a lot of my major successes. And without Kevin McHugh and Keith Brown I don't think I’d have ever got seriously into the sport.”

David also paid tribute to Richard Hounslow, with whom he shared success in the C2 races before the event was taken out of the Olympic calendar after Rio 2016.

“I've had a relationship with Richard for a really long time. We were friends on the junior team together and then some eight or so years later, when I had the idea of taking up C2, he was the perfect person to ask, a friend, an awesome competitor and I’ve shared so much of my success with him. Being part of a partnership when it's going badly is hard. It really pushes you on and it pushed both of us to work really hard. But when it goes well, sharing those Olympic podiums and world championship titles with a friend was an absolutely fantastic experience.”

David has spent the last 10 years training at Lee Valley White Water Centre, the home of the London 2012 Olympic Games where he won silver with Rich Hounslow in the C2. Having access to such a facility has been a key part of his success.

“I’ve had the best training venue in the world at Lee Valley and I’m so lucky to have been able to train here after the London 20212 Olympic Games. There's not many places in the world where there's the same opportunity and pathway to become an elite slalom athlete. We're so fortunate to have this facility along with the support of the National Lottery, without which I couldn't have achieved everything I’ve done."

“In addition to the national lottery players, I’ve also been really fortunate to have personal sponsors, particularly Lloyds Register, who have supported me for such a long time. All the support they gave me was a massive part of my journey and what I've been able to do so I owe a huge amount of gratitude to them as well.”

David leaves the sport to take up a new role with BlackRock.

“It's been a hard decision because I've really enjoyed canoeing. I would like to do it for a longer, but having a young family and being not as young as I once was, I just thought it was a good time to move onto a career that's going have a bit more longevity than paddling. This opportunity came up and I’ll be starting work in asset management for BlackRock soon so I'm really looking forward to that as well."

“Last year I think I was the oldest guy on the start lines so to win two World Cup medals was really special. It’s nice to end my career as one of the best in the world.”

Canoe Slalom Performance Director Mark Ratcliffe paid tribute to David and the legacy he leaves behind in the sport. Having been a stalwart of the team for more than two decades, his influence within the training and racing environment has been beneficial for so many youngsters. He said: “What an amazing athlete. David has been part of the British canoeing slalom team for so many years now - 20 plus years in the senior team alone. I'm sure it's been a really, really tough decision for David personally and it will be hard for us all, but I want to say what an amazing athlete David has been on the team, for the programme in the many years he's been on it."

“When you think of David, you think of commitment, and that is fundamentally what you need to be a top athlete. You have to really want it and throughout his entire career he has demonstrated that every step of the way. He’s had his ups and downs as any athlete would, but he’s come through them all. To achieve everything that he has achieved takes down to commitment, and he's been the shining light for our programme and for all the young athletes in showing what's required to be a top athlete. We wish him all the best in the next stage of his journey.”